Hay is a staple food in the diet of your guinea pig. Hay should make up about 80% of the diet of a guinea pig, and it needs to be high quality hay to meet their nutritional needs.

There are lots of different types of hay though, and not all hay is created equal. Some hay types are much more suitable and healthy for guinea pigs than others.

So learn about your hays, and find out which type you should be providing for your precious guinea pigs and what types of hay should be avoided.

Timothy Hay is one of the most high quality, and highly recommended hay types for guinea pigs.

Timothy hay is high in fiber which is critical for your guinea pig’s digestive health as it gives the animal important roughage that they require daily. Guinea pigs also benefit in the dental department when they chew on Timothy hay; not to mention the fact that you’re unlikely to find a guinea pig that doesn’t just love Timothy hay and its sweet natural taste.

It’s low in calcium, low protein and high in long strand fiber. Oxbow has also created a block version of their Timothy Hay (called Timothy Hay Stacks), which is the same hay but compressed into a block which is meant to reduce dust and is also a good option for anyone just wanting their hay to be placed in a convenient spot, rather than spread out everywhere.

Oaten hay or oat hay is another type of hay you may come across. It’s a hay that’s low in protein and high in fiber. Good quality oaten hay should be crunchy in its texture, making for good dental health. It’s a favorite of many guinea pigs thanks to its nice nutty type flavor that many piggies relish.

As the name suggests, this hay type is made from oat, but not the oats we eat – as oat hay is harvested earlier, before the oats (seeds) form. This results in nice fibrous husks which are aromatic, crunchy and enticing for guinea pigs. Oat hay is a favorite choice for guinea pigs, and is an excellent option alongside Timothy hay.

Lucerne hay, which is just alfalfa, is a high calcium hay. This hay type is not one to be used as a regular part of a guinea pig’s diet once they reach the age of 6 months and above. The high levels of calcium in lucerne/alfalfa puts a guinea pig at high risk of dangerous bladder stones. Avoid providing any lucerne hay or alfalfa to guinea pigs, even as bedding, to avoid the risk of them eating it.

Pasture hay or Meadow hay , also called Grass hay, is yet another hay type to consider for guinea pigs. Quality meadow hay is made up of clover and leafy grass. It is a good hay for bedding, but generally not on the list as a food hay.

Timothy hay is usually greener and more nutritious and therefore many people will only provide meadow or grass hay for bedding purposes. It’s not unusual to find twigs and other large items within meadow hay – another reason we should only look at using this hay type for guinea pig bedding. Lower quality meadow hay can come with all types of debris, and potentially dangerous stuff like grass seeds. For that reason many guinea pig owners choose to avoid grass hay completely, especially if you have better options on hand.

Orchard Grass Hay is another type of grass hay. This can make things confusing. This is a green or blue/green colored hay with a pleasant sweet fruit type scent to it. If you’re very familiar with timothy hay then you will notice that orchid grass hay looks very similar. Look closer though and you will see that the shape of the seed heads are different and the leaf blades are flat. The sheath of the leaf can be a bit rougher than timothy. Quality Orchard Grass Hay can be used as part of your 80% of the diet hay mix.

Once you know all about different types of hay and which are the best to provide as food and bedding, you can focus on learning about the quality of the hay you’re buying. This is a natural product and you will find that quality can vary substantially between different brands and suppliers, as well as due to a lot of other factors like seasons, your location, and just how careful retailers are with the age and storage of their hay stock.

When buying hay online, buying from reputable sellers will obviously give you the highest chance of receiving top quality hay when you can’t look at it before purchasing. The best pet supply retailers and large dealers like Amazon will be well aware of the importance of maintaining high quality hay stock so you’ll almost always be certain of receiving a good product containing hay at its maximum nutrient level.

So what is the best kind of hay for your guinea pigs diet? Timothy Hay ranks number 1, so if you can get your hands on a regular supply of high quality Timothy Hay then your guinea pig is going to be getting the best base diet possible. Oat or oaten hay is also a top choice, as is orchard grass hay.

Most local produce stores and pet stores will stock Timothy and oat hays under various brands including the well known and very popular Oxbow, as well as local producers or small local brands depending where you live. Or you can access many other options in online stores.

Should you mix different hay types together?
Yes! Provide your guinea pigs with a variety of hay when possible. But still only stick to the recommended types, so whatever your piggies choose to eat they’ll be getting high quality, high fiber hay as a staple part of the diet. Mixing hay types also provides variety, enrichment and gives piggies a choice.

You might notice them preferring one or two types of hay, so you can adjust the diet as time goes on according to your pet’s individual preference. A top quality mix of timothy, oat and orchid grass in unlimited amounts is sure to boost the health and stimulation of your guinea pigs.

But there’s another use for hay that new guinea pigs owners wonder about: bedding.

Yes, good quality grass hay can and should also be used as a bedding substrate for guinea pigs.

It’s not only really comfortable for them, but they can literally chew on and eat their bedding as well! 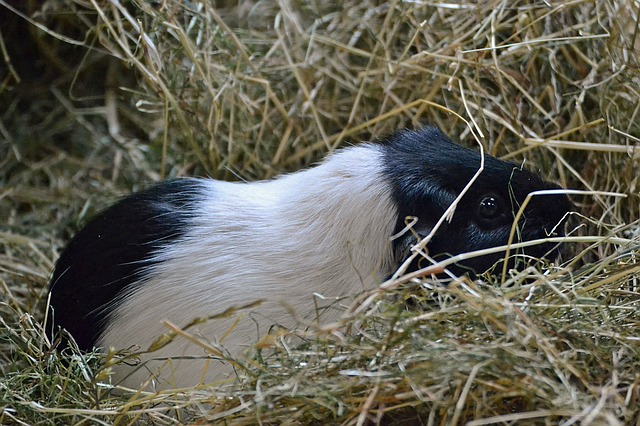 The important goal of quality guinea pig bedding is that it needs to be safe, comfortable and absorbent for the urine it will need to be able to effectively absorb.

It should absolutely not be dusty or made of any material that has perfume or other unnatural chemicals or additives in it. Avoid pine, cedar and other wood shavings and sawdust. These are dangerous for a guinea pig’s respiratory system.

A big mistake a lot of new guinea pigs owners fall for is to use dangerous cedar wood shavings as bedding. This is a huge No-No! We simply don’t need to be using unsafe materials when perfectly good hay is available.