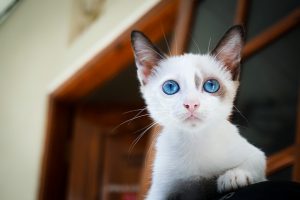 So you have a cat, or cats, and you want to get guinea pigs?

Or perhaps you already have guinea pigs, and you’re considering getting a cat?

The short answer is this:

It is highly irresponsible, no – cruel – to allow a cat to access pet guinea pigs. Even if your cat is one of those “he never kills or chases anything” types (we all know them, don’t we?) – the reality is that every single cat on the planet has as hunting instinct and it takes merely a split second for a cat to lash out at a guinea pig or other small pet (even in play) and cause horrendous injuries with sharp claws.

So on the question of whether a cat should ever be allowed to co-exist in the same living areas as a guinea pig – not if you care about your animals, and not if you’re an empathic, intelligent human being.

So how can you make it work if you sincerely wish to own both of these animals, without causing harm or discomfort to either?

Simply never allowing your cat(s) to gain access to the locations where your guinea pigs are is the solution to keeping both predator and prey under the one roof.

Even the sight of a cat instills great stress in prey animals, and that clearly will have a detrimental effect on the health of a guinea pig.

By being sensible, responsible and going to a bit of effort, it is possible to have both pet cats and pet guinea pigs without conflict – just keep them well away from each other at all times.